MARMADUKE, AR (KAIT) – All too often, the news is about people in the wrong place at the wrong time. This story is just the opposite. It involves a little boy, a freak accident and a flight nurse who just wanted to check something out.

Sometimes, certain people are put in your life at certain moments. This time, they were angels in the outfield. For the second time, Brian Coleman and Draven Fornash head to a helicopter in the middle of a softball field in Marmaduke. “You were right there on that bed,” Brian told Draven. “I was here,” Brian said, pointing to a seat just in front of the stretcher in the helicopter. As they sat in the helicopter Tuesday afternoon, it was a much calmer experience than April 17, 2013. “We were sitting at the base and I asked if we could fly over and look at the fields,” Brian explained to Region 8 News. 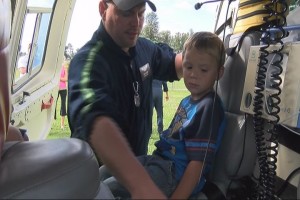 Brian Coleman is a flight nurse for Survival Flight out of Kennett but also heads up a youth softball program in Paragould. Last year, it had grown so large, he needed to use Marmaduke’s field for an upcoming tournament. “And I wanted to come over and see them to see how much work we’d have to put into them for the upcoming weekend’s tournament,” Coleman explained.

As they took off for Marmaduke, a mere 7 minute flight from Kennett, at the exact same time, tragedy had just struck the Fornash household in Marmaduke. “Our older boy, which was 9 at the time, had walked outside, he was with him, hadn’t actually seen him get kicked. He came running in screaming that bubba had been kicked, Draven had been kicked,” Draven’s mom, Tina Fornash told Region 8 News.

Then 2 and a half year old Draven had just been kicked in the face by a horse. A call to 911 brought disheartening news. “They said our closest ambulance was more than 20 miles away. So I said ‘Grab Draven, let’s get in the truck and go.'” Multiple bones in his face were broken, even shattered. As the Fornash’s loaded up to rush Draven to Paragould from Marmaduke, the Survival Flight crew had just arrived in Marmaduke. Their paths were about to fortunately and unexpectedly cross.

“We flew over, did a couple of passes around the park and Sal asked if I needed to land and I said, yeah,” Coleman said. “No sooner than we got in the car, got in the truck that we seen a helicopter landing in the Marmaduke ball field,” Fornash explained. “We landed and got out of the aircraft and about that time, a car pulls into the parking lot here by the community center,” Coleman said. “About the time they landed, we jumped out with Draven,” Fornash said. “Pulls out this child, obviously screaming, crying, bloodied up,” Coleman recalled.

After Draven was loaded up and intubated, the helicopter took off for Le Bonheur Children’s Hospital. Coleman helped Draven breathe the whole way. It was an emotional reunion as Coleman reunited with Draven over a year later. “It just brought it all back and you’re…really luck to be in a position to be able to help others.”

Though it was a fluke Survival Flight was even in the area, it was the greatest fluke the Fornash’s could have hoped for. “It was definitely, something was definitely with us that day,” Fornash said as she paused to kiss Draven’s forehead. “Everything just happened to be in spot when, I guess in all technicality, it shouldn’t have been.”

Draven was at Le Bonheur for 17 days and has since recovered completely. He’ll turn 4 this September.